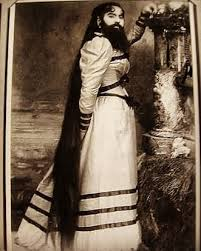 A bearded lady (or bearded woman) is a term historically used to advertise female sideshow performers with naturally occurring beards, however, the term is often genetically applied to any woman with substantial facial hair growth. Women who exhibit this facial hair trait have a condition known as hirsutism, or alternately, hypertrichosis. Hypertrichosis causes people of any sex to develop excess hair over their entire body (including the face), while hirsutism is restricted to females and only causes excessive hair growth on the face.

Josephine Clofullia “The Bearded Lady of Geneva” was noted as the most famous bearded lady of all time. She was born Josephine Bois De Chene in Versoix, near Geneva, Switzerland, on March 25, 1831. The family doctor had been somewhat taken aback by the dark, downy hair that covered the baby’s entire body, but he assured the parents that it would disappear in a few weeks.

When the superfluous hair did not fall out as predicted, the country doctor referred the child to specialists at Geneva Hospital; a scientific center for centuries.

At eight years old, the hairy growth on Josephine’s face had grown to two inches. Surprised medical men told the parents to leave it alone and see if the condition changed as the girl got older. To shave the hair was inadvisable, they said, because it would just grow in strength.

At 14 years old, Josephine’s beard was five inches long. Her father, a respectable Swiss farmer, was approached repeatedly by showmen who wanted to put his girl on stage. One after another, he turned down the proposals until, at last, a showman from Lyons came along with an offer that was difficult to refuse. He sold his farm, packed his other children off to boarding school, and joined his daughter on the French exhibit circuit.

In Paris she met painter Fortune Clofullia and eventually married him. Josephine gave birth to two children; a daughter born in 1851, died in infancy. Her son Albert, who was born the next year, was as hirsute as his mother had been.

Josephine, her husband, son and father moved to the United States to join with P.T. Barnum. Barnum had her beard officially measured as 6 inches, gave Albert a new name – “Infant Esau”, after the biblical character – and took them to his American Museum. Her scalp hair was past her knees.

The Greatest Showman on Earth

The Bearded Lady, known as Lettie Lutz in the Greatest Showman, filmed in 2017 was actually named Annie Jones in real life. Born in Virginia on July 14, 1865. Jones began her career at nine months and her parents received a $150-a-week salary. By age five, she had a mustache and sideburns, beard and became well known as the “Bearded Girl”. While Jones spent much of her 36-year career with Barnum in his “Greatest Show on Earth,” she also came to be known for her musical talents and gracious etiquette.

Yes, but are diagnosed early, often placed on medication and when old enough receive hair removal. Throughout my practice I have treated several clients with this condition and am rewarded by being able to change their lives, as you remove their hair a whole different person evolves. Previous to laser, patience and hundreds of hours were required for electrolysis treatments, but all of my clients were devoted and determined to keep to the set schedule required to achieve results. When laser came along I felt a miracle had happened for me and for my clients. I can help so many people and make a difference, taking less time and money invested to achieve permanent hair removal.

If in doubt about treating this condition then research, ask and should you feel you cannot deliver maximum results refer the client to someone who can.

SMILE and pass it forward (:

Author, The Life & Death of a Hair A Complete Guide to 100% Permanent Hair Removal