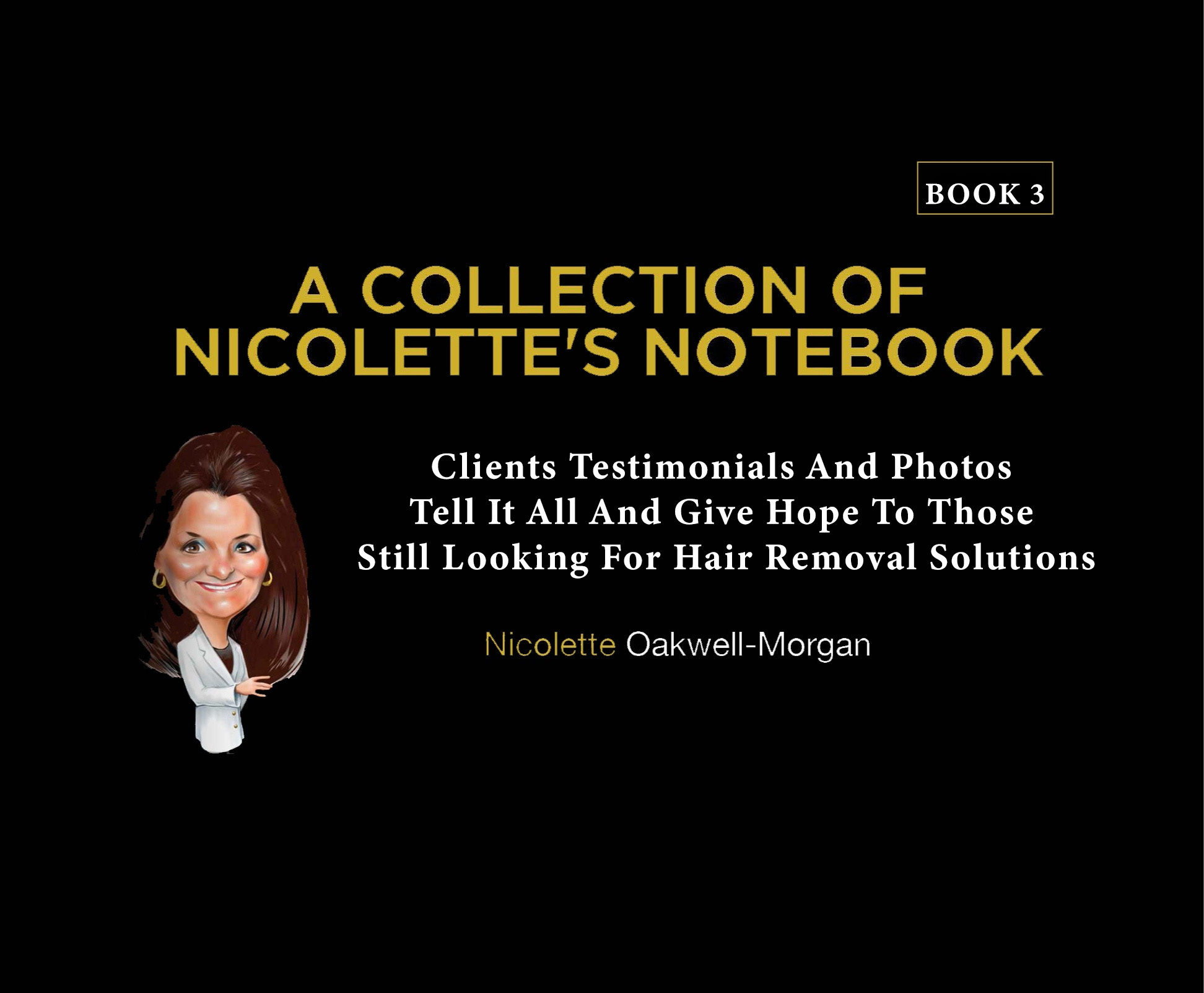 Clients have been so generous in sharing their stories/before and after photos so that others, like them, who have struggled with hair concerns see hope in their future to finally live a life without fear that someone just might see what they are hiding. As it is said, “pass it forward”!

I am a dark-skinned twenty-five year-old female. For years I have been struggling with embarrassing facial hair. I have done everything imaginable to address the situation, from shaving to chemical warfare, and nothing worked. It only made things worse by discolouring my skin and leaving it irritated and bumpy.

In 2012, I decided enough was enough, and began looking into more permanent solutions. I stumbled upon OMI and ended up attending my first consultation. I found Nicolette Oakwell-Morgan to be educated and confident in her ability to work with all colours of skin.

I remember feeling a sense of relief after my first meeting with Nicolette. After six treatments at the OMI clinic, my face was looking better than ever. However, the payments began to be a bit more than I could handle. I was a college student living on my own and with more bills than books to deal with, so I decided to stop treatments.

Sometime later, the hair began to grow back, even if it was much thinner and less prominent than before, so I began searching Groupon for cheaper/more affordable options. I soon found that these options were indeed too good to be true. I was attending countless sessions with no improvement. (but)I reached my last straw the day I left a session with second-degree burns on my face, neck, and chin, which is obviously worse than any amount of unwanted facial hair.

Immediately, I reached out to Nicolette again and scheduled another consultation in order to reassess the damage. Since then, Nicolette has been working with me, and my budget, and I’m glad to say that I’m back on track to receiving one-hundred-percent hair removal.

Today, my face and chin are flawless, and I no longer need makeup to feel confident about my skin being bright and beautiful – and this is all thanks to Nicolette!

“OMI really has changed my life, I feel so much better about myself. It’s obvious to me that OMI deserves their reputation of being the best in the business!!!”

My name is James and I met Nicolette and Robert Oakwell-Morgan as a gift from God. Previously, when it comes to hair removal, I was stumbling from ignorance. I was involved in sports and decided to shave my legs. I then became trapped in a cycle of constantly having to shave and struggling with the way I looked.

My discomfort with my appearance affected relationships. It was terrible.

I tried a laser, but I kept having to go back. It wasn’t much better than shaving. I was lost. I didn’t know what to do.

Finally, I read about OMI, and my life literally changed. Nicolette’s counselling was truly a blessing. With the treatments, my confidence gradually grew back. Although I sometimes wake up from nightmares in which I’m covered in hair, I can truly say that I am now one-hundred-percent free of unwanted hair. The dedication of people like Nicolette resulted in a funeral of all my sorrows.

I’m providing this testimonial in the hope of saving others from unnecessary and sometimes painful struggles with unwanted hair. Do your research. Avoid half-hearted measures. Knowledge and treatment from OMI will most definitely get you the desired results when it comes to permanent hair removal. I wish you all the best of luck.

I was born and raised in a small Canadian city. When puberty kicked in, so did excessive hair growth on my neck, chin, arms, legs, belly and breasts.

It’s hard to express how I felt having to endure such an embarrassing condition as a young girl. I didn’t seek out any new friendships, and I always avoided being the centre of attention. I couldn’t even bring myself to talk to boys for fear of being laughed at. I tried to become invisible.

Living in a small town meant there were few hair-removal options – shaving, waxing, and creams – but they were very temporary. I even have a photo of myself where you can see all the hair on my neck and jawline. It’s awful, but I keep it as a reminder of how bad things became for me.

I became aware of OMI through radio commercials when I moved to Ontario in my twenties. I wasn’t very hopeful that going to them would lead to permanent hair removal, but I thought I could at least lengthen the time between treatments.

Due to the severity of the hair growth on my body, it took many dedicated years of proper electrolysis and laser therapy. But it’s great to be on the other side of the tunnel and finally see the results of that dedication.

Is all the hair gone in all the target areas? No, but I’m happy to report that, at the very least, in some areas, all that’s left is hair that is so light, and far and few between, that I can barely see them, while other areas are even clearer.

What is even more important is the fact that I can hold my head up and look people straight in the eyes without dying of embarrassment.

Thank goodness I listened to those commercials or I may have lived the rest of my life with unwanted hair as the first and last thoughts of each and every day.

My sister introduced me to Nicolette and OMI in the mid 1980’s. I was experiencing more than average hair growth on my upper cheeks, as well as my lower neck line. Nicolette thoroughly explained to me the electrolysis procedure and schedule needed for successful hair removal. After diligently adhering to this regimen, I’m glad to say that I’m one-hundred-percent satisfied and have not experienced any hair regrowth since then.

When I noticed my son was experiencing the same hair-growth issues in the same areas as me, I told him about my experiences with permanent hair removal. In fact, he wrote a school essay on the topic. After I found out Nicolette was still doing hair removal, I told my son, he went to OMI, and the results were great with laser and electrolysis.

Thirty years after my initial introduction to Nicolette and OMI, I’m still one-hundred-percent satisfied and, now, so is my son! It really works.

My eyebrows grew together  when I reached puberty. At first, the problem didn’t seem so bad, so I tried tweezing. The hairs then started growing back thicker and the problem became worse!

I went to an esthetician to receive electrolysis treatments. After a while, I began to realize that I was on a treadmill going nowhere. The hair was not being removed permanently because the esthetician didn’t have the experience nor the knowledge. I desperately wanted a permanent solution. I asked my family doctor, who referred me to a dermatologist, who referred me to OMI. That was 1990.

At OMI, they put together a program to follow. We stayed within the schedule. Although the process took some time, I definitely started seeing some real progress, and, I’m glad to say the results have been permanent! It’s been twenty-five years since the treatment, and I haven’t had to go back.

However, because of my age, hairs are starting to grow in strange new places, such as my ears. So I’ve returned to Nicolette and OMI for another permanent hair-removal solution. They are professional, knowledgeable, and I know I’m in good hands!

About 10 years ago I had laser hair removal done with Nicolette. I had my legs and bikini area treated with huge success. Prior to my treatment, I was taken into her office to be educated about the process. The staff was informed, professional, sensitive and understanding. With each treatment I noticed a thinning and lessening of hair. To this day, my legs and bikini area are smooth, soft and without hair, which I absolutely love.

As a woman from a European background, I had a fair amount of dark hair. With successful hair removal treatments, I now have comfort, confidence and new found time without having to use temporary hair removal options. I am very happy with the positive results, so much so that I have decided to go back and have a couple of new areas treated. I have complete confidence in the person, the process and the technology. For a second time, I am elated with the success of my treatments! I am grateful to Nicolette for having invested so much of her time and energy into researching, learning and applying the most effective ways of permanently removing unwanted hair.

These are just a few of hundreds of testimonials from OMI clients.

SMILE and pass it forward (:

Author, The Life & Death of a Hair A Complete Guide to 100% Permanent Hair Removal

I love OMI. It is the only place I trust with 100% hair removal. Your book is fantastic and educational. Thanks to you I have obtained permanent hair removal. All the other places left me with broken promises. Thanks to Nicolette I now know true hair removal is possible. Thank you so much Nicolette and OMI!